Comedian websites vary greatly when it comes to how they’re designed, their goals, and ultimately how effective they are. But that doesn’t mean there’s not lessons you can learn from looking at them.

I’ve checked out the websites of several popular comedians and put together a few things worth noting from them.

Unfortunately, the vast majority of comedians’ websites really aren’t that great – it’s pretty pathetic to be completely honest – but I have managed to find at least 10 lessons you can learn from how some successful comedians are using their official websites. Here they are… 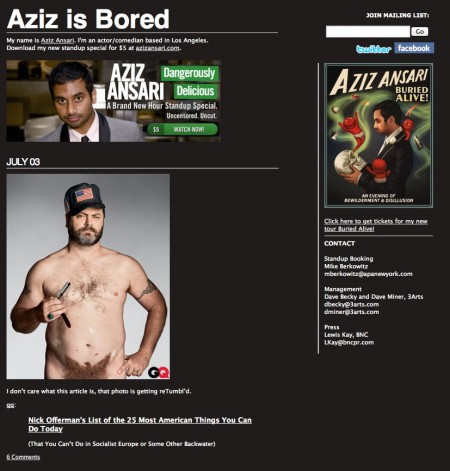 The Lesson: Be an early adopter.

Not only has Aziz been using the Internet actively since the early days of his career, he was one of the first comedians to use the Tumblr platform for his official website. He first launched his site on Tumblr way back on January 1, 2008, and it’s likely he gained a lot by being one of the first to embrace what has become a hub for comedians and comedy fans.

You don’t have to build your own website on every new piece of technology that comes around, but keep an eye on trends and remember that there can be advantages to getting in on the ground floor of something big. And more importantly, recognize that Aziz has been posting content on his website in some form or other for years – something that has surely helped him grow his fanbase. 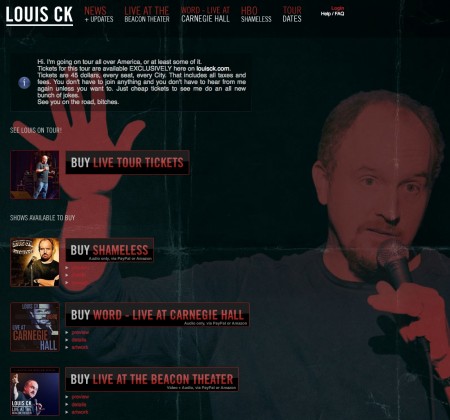 The Lesson: Use your site to control your career.

By now, you’ve probably heard a million times how Louis CK is revolutionizing the comedy business by proving the direct-to-fan model can work for selling everything from albums, to video specials, to tickets to shows. Well, what doesn’t get referenced often is that none of that is possible without a website that is well-designed, simple to use, and effective at converting interested fans into actual paid customers of what you do.

Louis CK’s “new business model” wouldn’t work if his website didn’t live up to its goals. 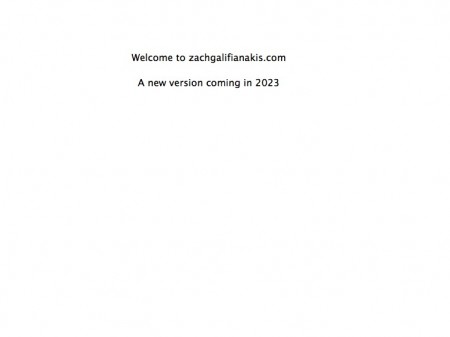 The Lesson: Use your domain – even if you don’t have a website.

Just because you don’t have the time, money, or interest in building a new website for yourself, that doesn’t mean you shouldn’t own your own domain and use it in some way until you finally get your act together to put up a proper website. Zach Galifianakis’ website doesn’t exist, but at least he’s put up a clever holding page on his domain that is right in line with his sense of humor. 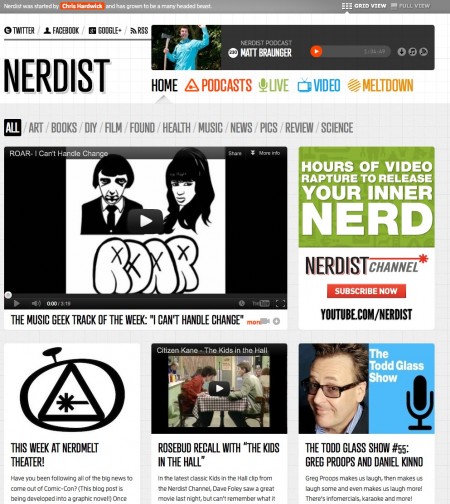 I’ve written extensively before about all the things you can learn from Chris Hardwick’s Nerdist website, but I think the most important thing you can take away from it is that your website can ultimately become much more than just a place to showcase the basic information about yourself and your career.

In Hardwick’s case, his website has literally been the hub to a reinvention of his career that has taken him to new heights and spawned an entire Nerdist empire that includes podcasts, web series, TV deals, and much more. Your website may not ultimately lead to all of those things for you, but it can if you use it the way Hardwick has. And that’s an important thing to remember. 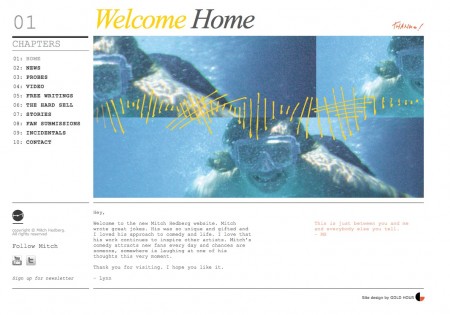 The Lesson: Everything you do has value to your fans.

Mitch Hedberg may be dead, but his posthumous website is a whole lot better than what most living comedians have. The site is filled with all kinds of interesting excerpts from Mitch’s notebooks, journals, and assorted other artifacts that most comedians probably don’t realize fans would love to see.

You should remember that your fans are likely interested in your process almost as much as they are the end results of that process and look for opportunities to let them more into your world by sharing elements of your process with them on your website. 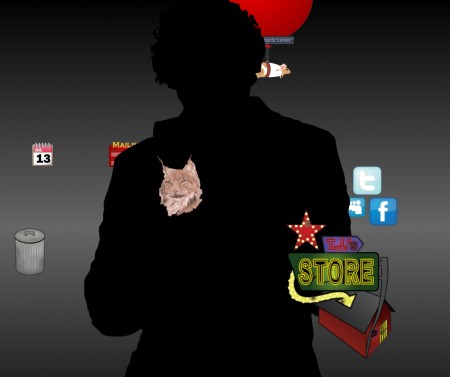 The Lesson: Make it fun.

Besides being incredibly unique (which surprisingly most comedians websites are not), TJ Miller’s website is just plain fun. The site is designed for fans to interact with it in unusual ways and enjoy a look into TJ’s world.

A great example of this is TJ’s links page, which features random links to things he finds interesting or amusing. Lots of comedians have a page like this on their site, but very few comedians have it in the form of floating unidentified bubbles which only reveal where they take you once you’ve clicked them. It creates a fun mystery game – and a good way to kill some time. 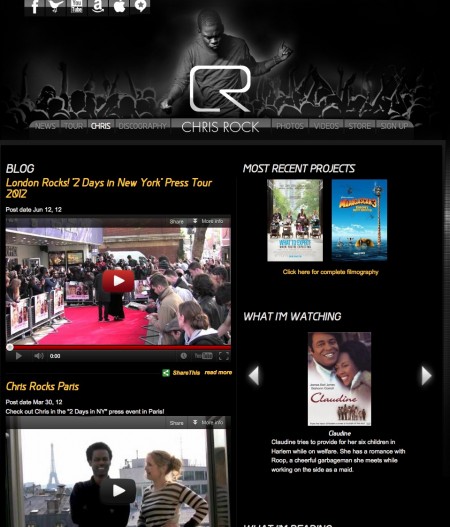 I’ve written before about how important it is to curate content on your website in addition to sharing your own original creations and Chris Rock’s website is a good example of that in action. On the blog section of his site, Chris regularly posts videos of stuff he finds funny – even if he had nothing to do with its creation.

Additionally, he has a section where he shares info about what he’s reading, watching, and listening to – much of which has nothing to do with comedy at all. Your fans – even if you don’t have as many as Chris Rock – are going to be interested in what interests you and your website is the perfect place to share that stuff with them. 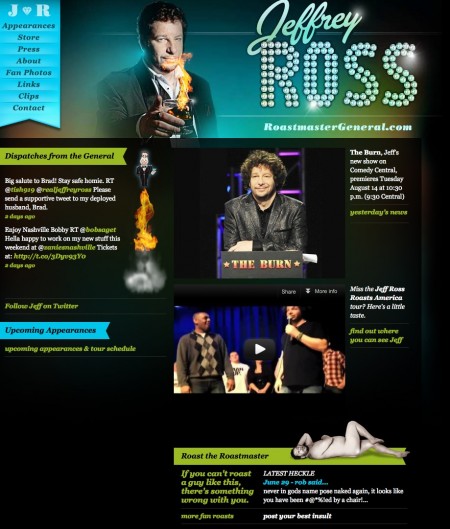 The Lesson: Enable your fans to get involved.

Another place where many comedians go wrong with their websites is they don’t include any opportunities for their fans to get involved by contributing content to the site. The simplest way to do this is just to allow and encourage comments on the content you post, but you can also get a lot more creative with it.

For example, Jeffrey Ross plays up his “Roastmaster General” brand by having a section of his website where he invites fans to “Roast the Roastmaster” by submitting their own roast jokes about him which he features on the site. It’s a nice way to connect with his fans and make them feel like a part of his site. 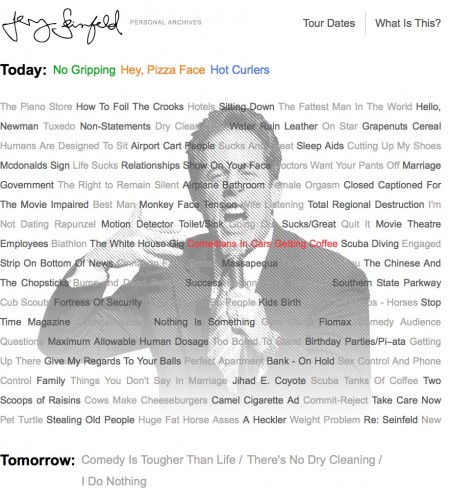 The Lesson: Have a unique approach.

The bottom line is that most comedians are going to have many of the same sections and same basic info on their website. But that doesn’t mean that you can’t try to present it in your own unique way.

Jerry Seinfeld wanted to have his site showcase his collection of TV appearances over the years – something that is a very common thing for comedians to do. But he came up with a clever way to present it that makes it feel fresh by presenting just three of them a day. In doing so, he’s created a reason for people to keep coming back to the site and built a curiosity factor about what will come next.

In everything you do on your website, think about ways you can present the information that are unique and different than what everybody else does. 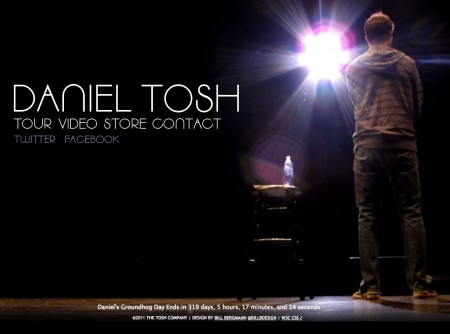 The Lesson: Don’t include features you won’t update.

Another common mistake comedians make is filling their website with all kinds of sections and features that they then never actually update with fresh content. As much as I think you should have an active website that you update regularly, if you’re not going to follow through with that then you’re better off not including those sections at all because otherwise it looks like you’ve just abandoned your site or it’s not important to you.

Daniel Tosh’s site has shockingly little content on it, but at least he’s not promising any. There’s worse things than a clean, simple site like the one he’s currently using.

Now It’s Your Turn: What comedians do you think do a good job with their websites? Leave a comment below and let me know…

21 thoughts on “Comedian Websites: 10 Lessons For You From Popular Comics’ Websites”