One of the biggest reasons you may struggle to get results on social media is because you may not be aware of some of the tools available to help you get the most out of various social networks.

There are a lot of valuable tools out there that are relatively simple to use and can help you find and connect with new potential fans and better promote your creations.

Here’s a quick breakdown of four tools that you probably haven’t used before, but can definitely help you achieve your goals.

I’ve talked a lot about how valuable (and cheap) Facebook ads are and the incredible value you can get from using them to promote yourself or your content.

But most comics who run Facebook ads do so without the help of Facebook’s most effective ad-creation tool, the Power Editor.

If you’re running Facebook ads just by clicking “Boost Post” next to a given post or by using Facebook’s standard ads manager, you’re missing out on a lot of options and functionality that will allow you to create more targeted ads that will perform much better for you.

Basically, using the Facebook Power Editor gives you more control and therefore you can create better, more targeted ads, which in turn leads to more success at a lower price point. It also allows you to create “dark posts,” which is another valuable option you can read about here.

I won’t go into a full overview of how the Power Editor works at this point, but here’s a great overview. And it’s worth noting that the Power Editor is free to use and you can only use it in a Chrome browser, so keep that in mind when you decide to give it a try.

Twitter’s search functionality is the most powerful feature Twitter has to offer and yet it’s rarely used by comedians.

Few comics ever really use Twitter’s search functionality and those that do typically only use the search bar at the top of their Twitter feed. But what you probably don’t realize is that there’s another way to search Twitter that gives you a lot more options to drill down into more targeted searches.

By using Twitter’s advanced search, accessible at Twitter.com/search-advanced, you can set all kinds of specific options to drill down deeper into what people are tweeting and when.

Want to see what I tweeted from the Connected Comedy account in September 2012? Here you go.

Want to see every tweet that somebody has tweeted at me that included a question? Here you go.

Want to see every tweet that includes the word “comedians” and a link to something on the New York Times website? Here you go.

I could go on forever, but hopefully you get the point – Twitter’s advanced search can be an incredibly powerful way to find relevant information and people for you to connect with based on your needs.

There’s a good chance you’re in a couple Facebook groups already (like my Connected Comedians group, for example?), but have you ever spent any time searching Facebook to find new relevant groups to join?

Facebook groups are a great way to get involved in communities that will be relevant to your interests and can be filled with people who may be interested in whatever your particular comedy niche may be. Beyond the networking benefits of joining a Facebook group with other comedians, the real value is in finding topic-based groups that attract members with shared interests that match the kinds of things you cover in your comedy.

For example, if your comedy revolves around being a father, then you might want to join the 1,100 members of the Dad Bloggers group.

Or if you think fans of Rachel Maddow are likely to enjoy your take on things, then maybe the 25,000 members of this Rachel Maddow Fans group are potential new fans of your comedy.

There’s an insane number of groups on Facebook and you can probably find one for whatever target audience you’re hoping to connect with. And it’s really easy to do.

All you have to do to find Facebook groups is log in to Facebook and type some relevant keywords into the search bar. When you get the initial results click the “Groups” button listed under the “More” drop down menu as you see below:

Once you choose Groups, you’ll see a list of the groups relating to that keyword and you can browse until you find ones that fit your needs. You’ll be amazed at what you find… 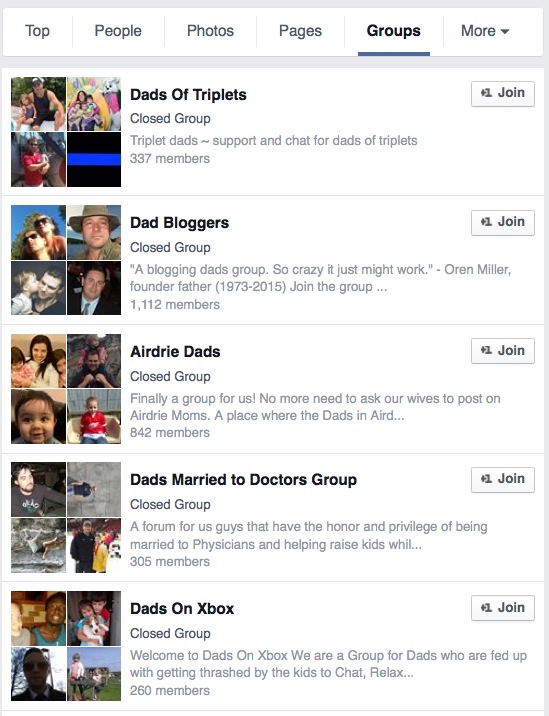 Another Twitter feature that gets overlooked is Twitter’s native video player. Launched a few months ago, it allows you to upload videos directly to Twitter and those videos will appear an play in-feed on Twitter.

While you’re probably familiar with Vine (which is owned by Twitter) and may have heard of Periscope (Twitter’s new live-streaming video platform), Twitter’s regular video player can be helpful for when you want to upload a video that’s longer than 6 seconds and isn’t a live-stream, but still have it appear in people’s feeds.

It’s as easy as uploading a photo and worth giving a try the next time you’ve got a video you want to share with your followers. Here’s an overview of exactly how to do it.

Want A Little Extra Help From Me?

READ THIS NEXT: 5 Social Media Shifts That Will Impact Comedians