Once upon a time way back when I ran a blog called Whip It Out Comedy, I used to write the occasional State of the Web Comedy Union post. It was essentially a look at what was happening in web comedy at the time (here’s what was happening in April 2008), and I thought it might be a good idea to revive the column here on Connected Comedy.

So, here’s a look at where comedy’s been and where it’s headed at the moment: 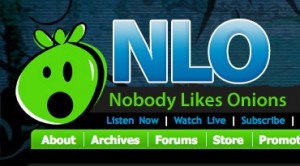 THE BIG NEWS: People Are Paying For Comedy Content

The golden rule of the Internet used to be that nobody will pay for content. But that’s started to change – at least it’s started to change when it comes to podcasts. Quietly, a number of comedy podcasts have started to generate revenue through a combination of donations, subscription memberships, merchandise, live shows, and sponsorships.

While the exact economics of these shows are not public information, I know that podcasters Adam Carolla, Marc Maron, Kevin Smith, and Jimmy Pardo are among those who have managed to turn their podcast creations into money making businesses. And the best news is that it’s not just guys with pre-established followings who have found people willing to shell out a few bucks for them. Relative unknowns such as Red Bar Radio and Nobody Likes Onions seem to be cracking the code as well.

Did you know that MySpace Comedy relaunched its new comedy page the other day? Probably not. That’s because while everything MySpace does used to be big news, it’s now unfortunately become very little news. That said, despite the site’s plummeting traffic and what seems like an inevitable demise, I applaud them for at least trying to come up with something new and worth your time. I know they’ve got some writers doing original work over there and I’ll at least be interested to see how it develops. 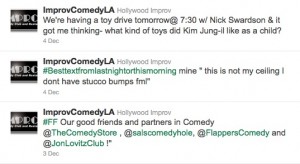 A couple weeks ago I posted an analysis of the way the Comedy Store and The Improv were using Twitter. But one thing I neglected to mention in it is how great I think it is that more comedy clubs seem to finally be embracing social media at all. For a long time they sat on the sidelines, but that seems to have changed in recent months. This is a great trend that will be good for the clubs, good for comics, and most importantly good for comedy fans and customers.

For a long time I’ve believed that it’s inevitable the the Internet and television will collide, providing unprecedented distribution possibilities and shaking up the entire Hollywood system. Well, that day still hasn’t come, but it’s knocking on the door thanks to companies like Netflix and devices like Google TV and Apple TV. The last thing standing in its way are the traditional Hollywood studios and distributors who are clearly doing everything in their power to prevent it from happening in a doomed attempt to protect their control of your TV set. The war’s coming whether they like it or not, and they’re going to lose. 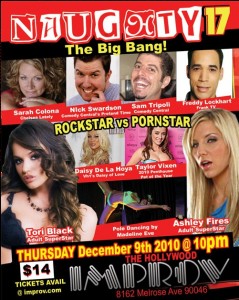 I went to two recent live comedy shows in LA that stuck out to me as examples of people that are doing things out of the ordinary and creating cool things in the process.  First, comedian Sam Tripoli has turned his monthly Naughty Comedy Show into a true “event,” featuring an absurd mix of characters, videos, stripper poles, porn stars, and stand up that’s hilarious and has built a great buzz around Hollywood. On the other end of the spectrum was the Ghetto Bird Social Club, a stand up comedy show put on in the apartment building parking lot of comedians Mike Bridenstine and Mike Holmes that featured great comics performing outside (under the sweet hum of police helicopters) in a really unique atmosphere.

DOING IT WRONG: The Laugh Factory

I love what the Laugh Factory has been doing in terms of shooting videos of the performers at its club and the idea for an 80-hour comedy marathon that’s being broadcast streaming live online right now is a great one. The only problem? Making people register and login to watch it. Sure, it only takes a second and it isn’t that big of a deal, but it just seems like an unnecessary deterrent to people that you ideally want to tune in and share your show with their friends. I’d suggest making it easier for people, not more difficult.

At what point are brands going to realize that traditional advertising (read: cramming bad commercials and banner ads down the throat of any audience that you can find) doesn’t work? And at what point are content creators going to realize that relying on advertising revenue to fund their projects is not a great business model? Either both sides know this and are just playing dumb because it’s easier than trying to create a new business model that provides actual value or both sides actually are just dumb. Which one do you think it is?

One thought on “The State Of The Comedy Union: December 2010”