It’s been a week since I declared I was going to increase my email list subscribers by 25% this month and explained exactly how I hoped to do it. So, I wanted to give you a quick update on what I’ve tried so far and what I’ve learned.

Again, I hope that you’re experimenting on your own to grow your email list and that some of what I share here can help you with your own list.

Just a quick reminder: my overall goal was to get 285 people to sign up for my Free Tips Newsletter email list over the course of 30 days, which would mark a 25% increase in the number of subscribers I had gotten the previous month.

That means that in order to be on pace to reach that goal, I need to get an average of about 9.5 new subscribers each day.

THIS WEEK’S RESULTS – SO FAR, SO GOOD

In the first 7 days of my experiment I’ve added 69 new subscribers! This means that I averaged 9.85 subscribers per day which puts me slightly ahead of my goal pace for the month.

I’m thrilled that I’m off to a great start, but it certainly wasn’t easy – I tried a bunch of different things to increase my subscriptions this week and while some of them were effective, several were not.

HOW I DID IT: SUBSCRIPTION FORM CHANGES

The first thing I did this week was experiment with changing some of the web forms that I use to get people to subscribe to my list. My changes turned out to be a real mixed bag with some working better than the old forms and others actually performing worse.

The first thing I changed was my pop-up email form. I increased the frequency that it is shown to readers – they used to only see it once every 30 days and I changed that to once every 15 days. That’s still pretty infrequently so I don’t think it will be too annoying, but it increases the number of times people will see it so maybe that will lead to more signups.

More notably, I changed the form itself – twice. Here’s a look at my original form (on the left) followed by the next two versions I tried. 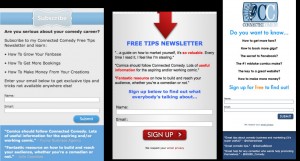 When the original version of my pop-up form was running,  3.3% of the people who saw it wound up joining my email list.

Version 2 of the form was designed to see what would happen with a different design and one which played up quotes from people about the newsletter as opposed to detailing the service it provides. Unfortunately, that didn’t work out very well as my conversion rate plummeted to 1.3%.

Realizing that wasn’t working, I changed on the fly and designed version 3, which included a Connected Comedy logo and an emphasis on the questions that I answer through my Free Tips Newsletter. This one has only been running for a couple days, but the results are definitely more encouraging as 2.9% of the people that have seen it have joined my list.

Unfortunately, that’s still below the original version of the form, but I’m going to give it a few more days for a larger sample before making any additional changes or switching back to the old form.

I had better results when I made changes to the Sidebar Form on my site. Here’s what the old form looked like:

That old form converted just 0.6% of the people who saw it into subscribers. I switched it up to a new design that would be shorter, and more importantly featured a big red arrow hoping that it would catch more people’s attention as opposed to blending into my site’s color scheme like the old one did. Here’s what it looks like:

There wasn’t a huge difference in results, but this new form did prove more effective as the conversion rate grew to 0.8%. I may still experiment some more with it, but it’s nice to see at least I took a step in the right direction.

HOW I DID IT: MORE TRAFFIC

It’s simple math that the more people I get to visit my site, the more email subscribers I will get assuming my content is good and my subscription forms are relatively effective. So, I set out to try to increase traffic to this site this week and was successful.

Even though I only posted a couple new articles this week (which is about what I usually do), I also shared links to some of my older popular articles through Facebook, Twitter and my email list. As a result, links I shared to articles like 25 Things Most Comedians Do and 4 Misconceptions Comedians Have About Stage Time suddenly got spread around and brought in a bunch of new traffic without me actually having to do any additional new work.

I think there’s a good lesson here in the value of quality, timeless content – you can always re-promote it because the chances are there will be lots of your readers who only discovered you after it was originally published.

The result of these moves was a 63% increase in traffic to my website last week compared to the previous week and, like I said, more traffic equals more subscribers. Plus, there was a direct correlation to me re-promoting those old posts as I got 11 new subscribers who signed up on my stage time article page and 7 who signed up on the 25 things most comedians do page.

I’m off to a good start with this project, but I’ve still got a long way to go. In this next week I’ll likely continue to try some different subscription forms, promoting some of my most popular articles, and I’ll see if the addition of my new Comedy News page has an impact in attracting some new traffic to the site as well.