As the world continues to obsess about all things Charlie Sheen, I couldn’t help but notice that he actually replied to a couple tweets from comedians in the past couple days. Charlie’s Twitter account is now up to almost 1.5 million followers, so I assumed that anybody lucky enough to get him to respond to them would probably see a nice uptick in their own followers.

To test my theory, I went to TwitterCounter.com and checked the stats for comedians Natasha Leggero and Paul Scheer, both of whom were referenced in Sheen tweets. Sure enough, both saw big gains in followers the past couple days.

Here’s a chart for Natasha’s account that shows she’s added 3,558 new followers (as of now) in the two days since Sheen referenced her account: 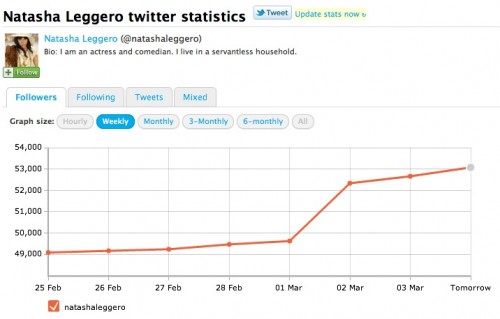 And here’s a chart showing that Scheer has added 6,347 new followers since he got a Sheen plug: 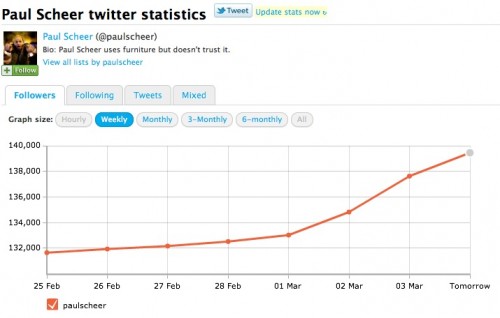 So that means according this incredibly small sample size, getting Charlie Sheen to reference you on Twitter will get you about 4,900 new followers. Let the @CharlieSheen tweeting commence!

In case you can’t get Charlie Sheen to acknowledge you on Twitter, you may want to get followers by checking out these tips to get more twitter followers.

One thought on “How Many New Followers Do You Get When Charlie Sheen Mentions You On Twitter?”