Until a couple days ago, I hadn’t really done much to grow my Connected Comedy Facebook fan page and therefore it had only accumulated 66 fans. Those fans came mainly from a mix of friends and people I knew personally, as well as people who happened to stumble across the page as promoted in the sidebar of this site.

But I decided to put a little effort into growing the page and, more importantly, to introduce Connected Comedy to a larger audience through Facebook. To do so, I ran an ad for the page on Facebook. The ad has been very effective so far, and despite only spending $20, I more than quadrupled the fans of the page and I’m now up to 311 fans as I type this.

Here’s a basic primer to running Facebook ads, but I thought I’d share with you my strategy behind the ad and a glimpse at the stats behind the end results, because there’s probably a few things you can learn and apply to promoting your own Facebook pages.

For starters, here’s a copy of the ad that I created: 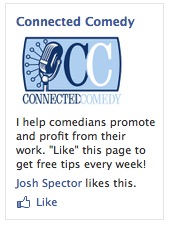 Simple enough, right? Well, here’s a few things you should know about the thinking behind its creation:

1. It’s A Facebook Page, Not A Group or Personal Profile

The first thing you should understand is that I set up Connected Comedy as a Facebook Page, as opposed to a Group or Personal Profile page. This has a lot of advantages, but one of them is that when running an ad for the page I had the option to include a “Like” button in the ad so that people can like it from the ad without even clicking through if they don’t want to.

While your instincts may be to make yourself seem more “professional” and write in a formal manner, I’ve found that informal and personal is always better. Even for Connected Comedy, which offers professional advice, I decided to write informal copy in the ad. This is why it’s written in first person (“I help comedians…”), and why I avoided words like “marketing” and “business” that sounded too corporate. People want to connect with other people, not companies.

3. It Gives People A Reason To Join

Nothing’s more important in a Facebook ad than presenting a clear explanation of what somebody gets in return for doing what you want them to do. In this case, my ad clearly explains that you will get free tips if you “Like” the page – that’s a compelling reason to join if you’re a comedian. You should always figure out what you can offer people of value as a reason to “Like” your page. Make the ad about what’s in it for them, not what’s in it for you.

I was running a CPC campaign (which means I only pay when somebody actually clicks on the ad as opposed to a CPM campaign in which you pay every time the ad is displayed), so I wanted to make sure I targeted the ad as specifically as possible on people that I thought would enjoy Connected Comedy if they actually clicked the ad. This means I didn’t want people who were just casual comedy fans, or curious about what Connected Comedy was. I wanted comedy professionals who would be most likely to convert to fans after they clicked the ad and saw my page. That way I would get the most bang for my buck.

To do this, I targeted very specific keywords including “Comedian,” “Stand Up Comedian,” and “Laughstub” (a website that’s primarily used by professional comedians) and avoided broader keywords like Comedy, Comedy Central, and Funny Videos. Again, I knew the key to getting the highest conversion rate was getting comedy creators seeing and clicking the ad and making sure that general comedy consumers didn’t click on it.

5. It Leverages The Power Of Endorsements

Here’s the biggest reason I think this ad has been so effective. I set the ad to target people whose friends were already connected to the Connected Comedy Facebook page. What that means is that I targeted the friends of the 66 fans I already had of the page. As a result, when those people saw the ad, it appeared with a line that referenced that their friend was already a fan of Connected Comedy (it looks just like the line you see above that says “Josh Spector likes this.”)

This is very important in my opinion because it means that my ad is essentially running with the implied endorsement of people’s friends. In fact, so far 87% of the people who have seen my ad saw it with one of their friends referenced as already liking the page in the ad (Facebook provides this stat in its ad analytics). Needless to say, if you see a page that your friend already likes you are going to be way more likely to check out the page yourself as opposed to just seeing a random ad for a page you know nothing about. Also, even though I only had 66 fans of my page initially, I was still able to generate an initial pool of 5,000 people to target the ad to, so you don’t need a huge initial fan base to implement this strategy.

I’m a big stats junkie, so here’s a breakdown of exactly what happened in the first two days I ran this ad for the Connected Comedy Facebook page:

• The ad was displayed 77,946 times (Facebook has a LOT of traffic in case you didn’t realize that by now).

• Of the 258 people who clicked through the ad to the Connected Comedy Facebook page, 104 of them took an action. This means that they either liked the page, shared a post, or commented on a post. But it mostly means they liked the page.

• The average cost per click it cost me was $0.07, which means I spent a total of $20. Remember, I was running a CPC campaign so I only paid when people actually clicked the ads.

• Here’s a fun stat for you: The average Facebook user has 150 friends, which means that if 245 new people fanned my page and their friends saw that action in their news feeds, then those 245 new fans actually exposed Connected Comedy to an estimated 36,750 of their friends!

Obviously, I’m pleased with the results of this little ad experiment, but the real reason I’m happy is not just because I added a bunch more fans. Rather, it’s because I added high quality targeted fans who will care about the content I share and will likely become a part of the community we’re building here and then ultimately spread the word to others.

How do I know? Because I’ve already had multiple people email me with questions, comments, and compliments about Connected Comedy, a site they didn’t know existed two days and $20 ago. Pretty cool, huh?

Looking for more help? Check out some of my other comedy promotion tips.