As I’ve mentioned many times before, I believe that there are opportunities all around to get attention for yourself and introduce yourself to new potential fans if you start to look at things in a different way. I believe that anything interesting you come across in your life – a story, an event, a moment, an irony – can be fodder to attract attention for yourself online if you understand how to look at it that way.

Personally, I have trained myself to look at offline things through the eyes of the Internet, so I can’t help but notice things occasionally that I know will “work” online. I came across one such thing yesterday and I wanted to share that story with you today.

I’m visiting my parents back East this week and last night my Dad was showing me a bunch of old family photos. One of the photos he showed me was of my grandfather and my grandfather’s cousin, sitting in what has to be the most ridiculously small backyard pool I’ve ever seen. Here’s the photo: 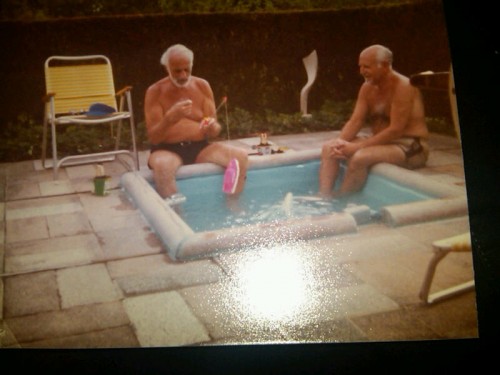 That photo itself is pretty funny, but what made it even more hilarious is that my Dad explained that for years my grandfather and his cousin used to talk nonstop about how great the pool parties were that they threw at their pool. My Dad always assumed it was some amazing pool, until he eventually saw what it actually was.

Anyway, as soon as my Dad showed me the picture and I stopped laughing, I immediately thought to myself, “Reddit will love this picture.”

I thought that because I knew enough about Reddit, a great social media site for link sharing that loves funny photos with a good backstory, to know that this would be just the kind of thing that readers of that site would enjoy and probably “upvote” to the point that it would get seen by a lot of people.

So, I scanned the photo and uploaded it to the web, then shared a link to it on Reddit in their Pics category. I knew that the backstory would add to the photo and that Reddit (just like the rest of the Internet) would react well to a personal touch from the uploader, so here’s the headline I used when I posted it: “My grandfather used to brag about all the pool parties he went to at a friend’s backyard pool. I just found out that this was that pool.”

So, what happened? Well, as you can see by looking at the link, it was viewed more than 10,000+ times in the past 24 hours – even though I don’t have an exact view count, I know that at least 6,000 people voted on the link and the vast majority of people probably didn’t bother to vote.

This is free exposure for a piece of “content” that cost me nothing and took me less than 5 minutes to create. And it all comes as a result of me understanding how the Internet and social media works and recognizing an opportunity, even when I wasn’t looking for one.

I’m not a comedian and I had no need to really “promote” myself to a general audience, so I didn’t bother embedding the picture on my site or labeling the picture with my website URL. If I was a comedian however, I definitely would have to get that exposure.

Now I’m sure some of you are already shaking your head at this and doubting how posting an old family photo will have any impact on your comedy career, but that’s not the point. Posting an old family photo is just an example of the kind of simple thing you can do to bring thousands of people into your world for no cost – and that’s incredibly valuable. Then, once you’ve made the introduction, you’ll begin the process of converting those people into fans.

The next time you come across something interesting in your life, I hope you’ll take a moment to think about how you might be able to use it to attract some new fans for yourself. The chances are that there’s probably a way you can.

7 thoughts on “How I Got 10,000+ People To Look At Something That Took Me Two Minutes To Create”