In the spirit of experimentation, I thought I’d try a new type of post out today. Here’s a somewhat rambling look at several things I’ve been thinking about and that have caught my eye recently that I thought might be worth mentioning.

I deal with lots of comedians who I don’t personally know through Connected Comedy, and I’m amazed how many of them just add my email address to their mailing list and send me email blasts that I never signed up for and that are completely irrelevant to me (i.e., I’m probably not going to fly from LA to Cleveland to check out your next Open Mic).

Not only is it technically illegal due to spam laws, but it’s also just plain stupid. If people haven’t subscribed to your email list, it’s because they’re not interested in what you have to say. To think that suddenly spamming them with an email is going to win them over and convert them into a fan of yours is insane – it will actually do the opposite.

The quickest way to make people hate you – and ensure they’ll never join your email list – is to add them without their permission. I’m sure there’s a zero percent success rate of getting those people to come to your show or buy your product, so all you’re doing is turning potential fans into enemies.

You Never Know Where It’s Going To Come From

60 Minutes did an interesting feature on Twitter founder Jack Dorsey last week and I highly recommend you watch it below.

It doesn’t really have anything to do with comedy, but it’s interesting to see how Dorsey thinks and specifically that the original idea for Twitter evolved from his fascination with trains and the way police communicated with each other in short bursts.

The point is that even if your interests or expertise isn’t comedy related, there may be ways you can take what you’ve learned and adapt it to your comedy career. Just something to think about…

It was my birthday recently and just like everybody else on Facebook, I got the usual batch of birthday wishes from friends posted on my Timeline.

But one thing I happened to notice was this image from comedian Leighann Lord which happens to have some built in promotion for herself and her website. 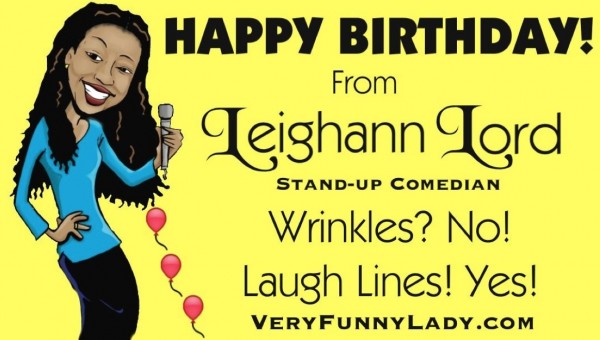 I’m not sure I exactly love this execution – feels a little too promotional and not personal enough – but I do think it’s an interesting concept and potentially clever way to take advantage of an everyday occurrence to get more exposure for who you are and what you do.

Keep An Eye On Medium

Have you checked out Medium yet? It’s a pretty interesting new blogging platform/social network from the guys who originally brought you Blogger and Twitter (which bodes well for its chances of success).

It’s basically a site where you can write blog posts and then have them grouped along with posts from other people about a specific topic. It’s currently by invite-only, but it seems to be developing nicely and is definitely worth keeping an eye on.

Another Reminder That There Are No Rules

Have you heard about that Steve Jobs movie that’s coming out starring Ashton Kutcher? Well, so did Funny or Die and they decided to make their own full-length Steve Jobs parody movie and release it online before the Kutcher movie hits theaters.

The announcement got a ton of press and is a really clever marketing stunt – whether their movie winds up being any good or not.

This is a good example of how you can piggy back on big entertainment events to attract some attention for your own projects. You may not have the resources to make a full movie like Funny or Die did here, but there’s other stuff you probably could have done. Like put out a Making of the Jobs movie parody web series? Or a fictional Jobs movie production meeting blog?

Opportunities are everywhere if you start to think differently – no pun intended.

An Interesting Twist On A Crowdfunding Project

I recently saw that Katie Goodman (who you may remember from a great appearance on our podcast where we talked about women in comedy) has launched a campaign to raise money from fans to help pay for a show she’s putting on in the Edinburgh Fringe Festival. You can see her campaign on Indiegogo to raise the money here, but what I really found interesting was an email she had sent out to fans before launching the campaign.

That email, which you can view here, was actually soliciting her fans to donate goods or services which she could then put up as prizes for people who donated money – as opposed to the usual straight ask for money. I thought it was a really interesting way to get fans involved beyond just giving money, and also allows her to provide some pretty interesting prizes that aren’t just of the usual tickets/merch variety.

What If Comics’ Worked For Tips?

Speaking of monetization, I saw a bunch of buzz this week about Chirpify, which describes itself as a “social commerce and payments platform.” That’s basically a fancy way of saying that they’ve created a way for people to pay you (or donate money to you) simply by posting a tweet or Facebook update.

It remains to be seen if it will catch on and I haven’t tried it yet myself, but it looks like it could be interesting and certainly something that could be helpful to comics – if it catches on among users. And if it did, think about this idea – could crowd members at a show directly “tip” a comic for their performance by tweeting from their phones in their seats? And if so, would that provide comics with another way to monetize their gigs directly from people who are in the crowd and based on the quality of their performance?

Taken one step further, what if when you bought tickets to a comedy show the comics’ share of the ticket prices were put into a pool and the audience got to decide what percentage of their money went to each comic on the lineup based on their performances? That seems more fun for the audience, better for the comics (the good ones at least), and like a pretty interesting hook for a show.

And Now, A Question For You…

I’ve been thinking a lot about how I run Connected Comedy lately and how I can best serve what’s become a pretty large audience of comedians who care about their career and growing their fanbase.

I’d be curious to hear from you guys – what would you like to see more of in the Connected Comedy universe and how do you think I could provide more value to you?

I’d love to hear your thoughts in the comments or feel free to email me if you’d prefer. Thanks!

If you found this post helpful, I hope you’ll consider supporting Connected Comedy.